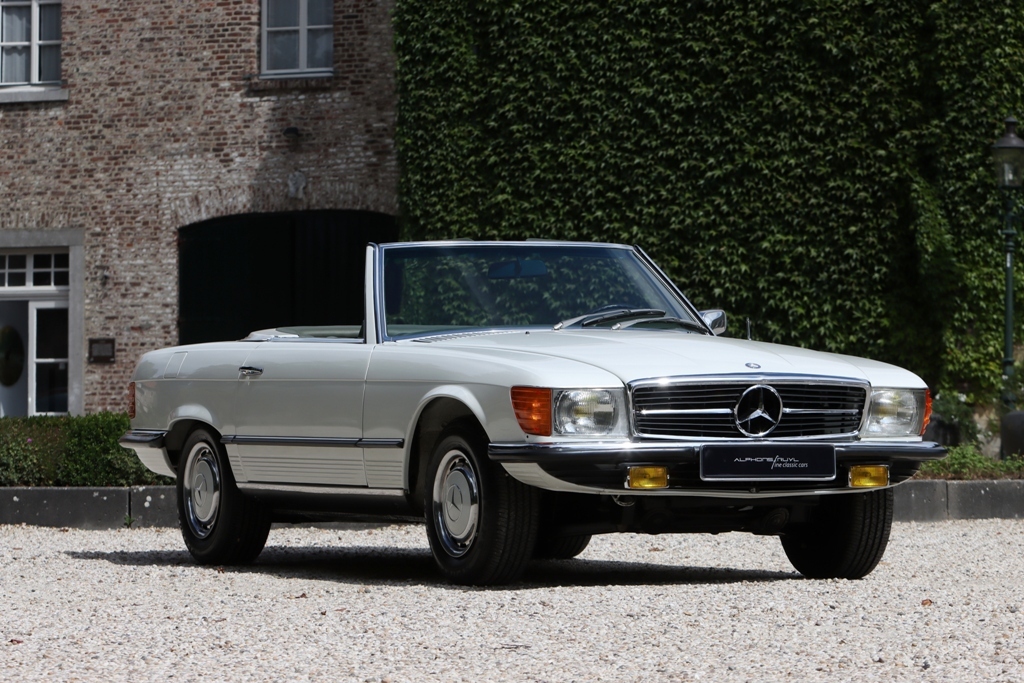 This early 350SL Roadster with some rare style elements such as the orange reversing lights, the chrome panel around the gear level was delivered new on August 17, 1972 in Monte-Carlo, Monaco to Mr. Brisset. As the available documentation shows, the Sport Leicht was taken over in the 1980s by his son, who lives in Nice in the south of France. Last year we bought the SL in a beautifully preserved condition from a French Mercedes dealer, they had purchased the car directly from Mr. Brisset Jr.

Factory delivered head rests and without exterior mirrors. It was very common at that time that the supplying French dealers of various car brands mount exterior mirrors at a location specified by the customer. Similarly with this 350, a pagoda mirror was selected, holes were drilled in the driver’s door and the mirror was mounted. We also noticed some poor-quality repainted body parts and on the other hand some first paint parts with minimal but eye-catching paint damages. These contributed to the decision to renew the paint. Attachments were carefully dismantled and only the outside was sanded down to the original primer. Of course, we have a detailed photo report available on request. The chassis and body are absolutely stainless and rust-free, the underside has been easily cleaned and shows all original features.

The green-colored MB-Tex seats and door panels, only two-colored on the early models, are original and show only minimal signs of wear. The by the sun faded carpets and the age-affected soft-top with discolored rear windows where replaced. Technically we have just invested more than € 7.000, —, many worn parts have been replaced, new Dunlop Classic tires have been fitted in the correct size. The front and rear bumpers were originally equipped with bumper over-riders, an option falling under option code 629 France version that, in our opinion, had no added value from a stylistic point of view and would suggest a US rather than an EU version. We have dismantled the over-riders which we will supply with, or fit mounted again on the car if requested.

A family owned, unrestored and accident-free 350SL in its purest form and beautiful color combination with a uniquely low mileage of only 56.985Km.